This indicator was used as it gave the greatest spread of results, allowing easier comparison across the range of other information collected.

Variation in flow was compared across the range of dripline installation dates at each site (Figure 1). Pressure compensating systems are shown in blue, and non-pressure compensating systems are shown in orange. The oldest dripline in the sample was installed in 2000, and was therefore 19 years old at the time of testing, and the youngest was newly installed in 2019, thus being less than a year old. 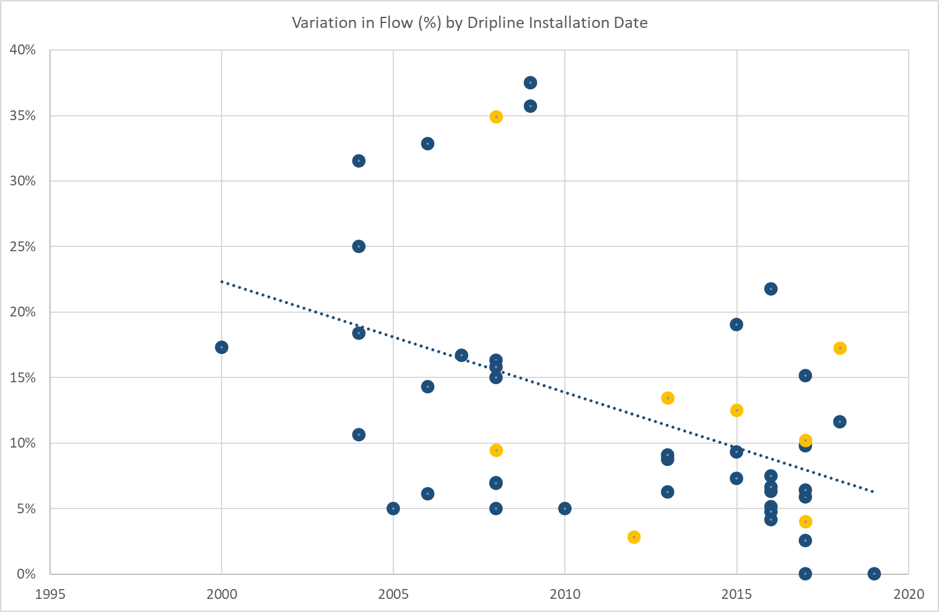 Although there is a wide range of performance across the sites measured (from zero to 38% variation in flow), there is a clear trend for older dripline to perform more poorly than newer dripline. Having said that, there are some sites with very new dripline (2 to 4 years old) which are performing poorly (>5% variation in flow), so it is clear that age of the dripline is not the only factor effecting system performance.

Participating irrigators were asked to indicate how often they flush the dripline laterals in the valve unit being assessed. Figure 2 compares variation in flow with the estimated annual number of lateral flushing events at each site, derived from the flushing frequency data collected.

Flushing is designed to remove the accumulation of debris which comes into the irrigation system from the water source (silt, sand), or in some cases grows or precipitates out in the irrigation system itself (bryozoa, algae). This debris can accumulate in the dripper labyrinth, partially or fully blocking the water passages. Partial blockage may serve to reduce the flow rate of individual drippers, leading to increased variation in flow. However, In the case of pressure compensating drippers, partial blockage may also interfere with the operation of the pressure compensating diaphragm, resulting in increased flow from affected drippers. 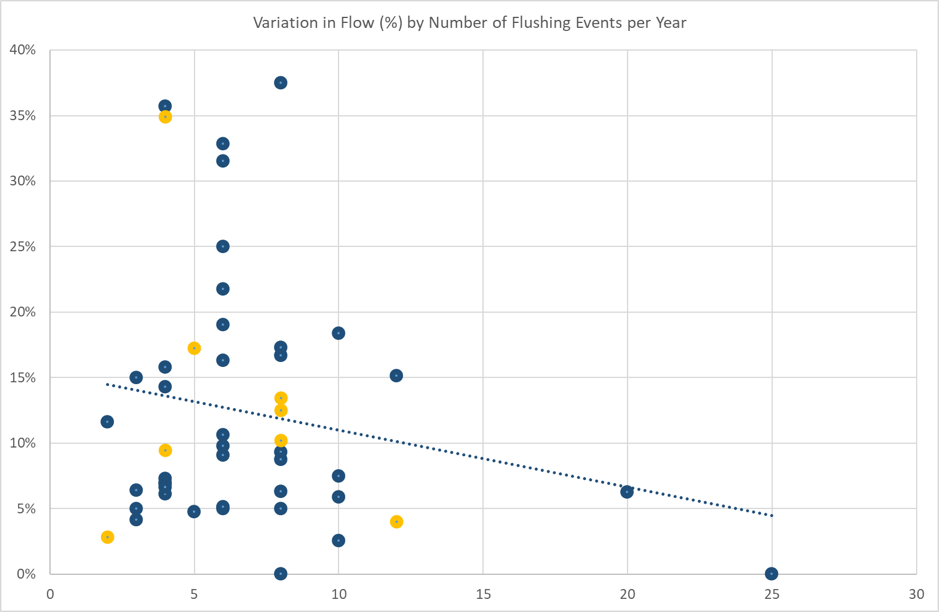 There is likely to be a degree of error in the calculation of the number of flushing events per year, but there is a clear trend in the above graph for better performance (lower variation in flow) with an increase in flushing events. However, it is clear that there is a wide range in performance with the same flushing frequency in the data below 10 flushes per year, and it is the performance of the two sites where flushing occurs 20 and 25 times per year that are particularly influencing the trend line. 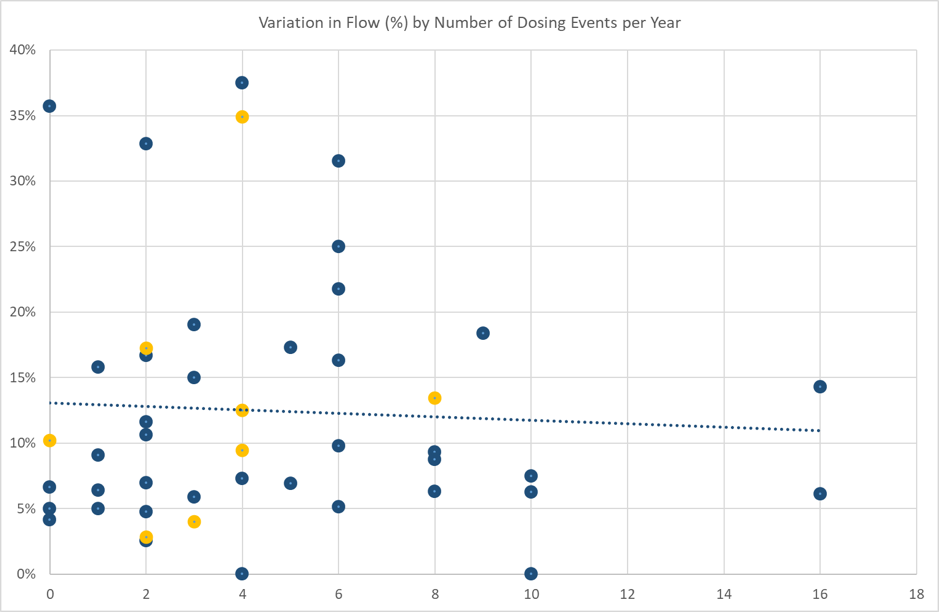 The graph and trend line in Figure 3 indicate that the effect of dosing frequency is much weaker than the effect of flushing frequency (Figure 2), with a much flatter slope to the trend line. Despite this, there are likely to be specific sites where chemical dosing is critical, due to the characteristics of the water, for example where there is calcium carbonate or iron in ground water, which precipitates out of solution when exposed to air at the dripper outlet. Chemical dosing is the only way to combat this issue.

However, in the majority of the sites tested, and across the Australian almond industry in general, water quality issues are more related to suspended matter and biological growth within the irrigation system. Chemical dosing is important to manage biological activity in the system, but frequent flushing is the best way to manage both of these issues, by clearing material from the system before it is able to accumulate and begin to block emitters.

This does not mean that chemical dosing is unnecessary, but the frequency and type of dosing is much more dependent on the types and concentrations of material in the water and irrigation system, and must therefore be managed on a site specific basis.

The relationship between irrigation system performance and where the orchard is located. This graph is a box and whisker plot, where the large box contains the middle 50% of data points, the whiskers contain the majority of the remaining data, and outliers are shown as isolated dots beyond the whiskers. 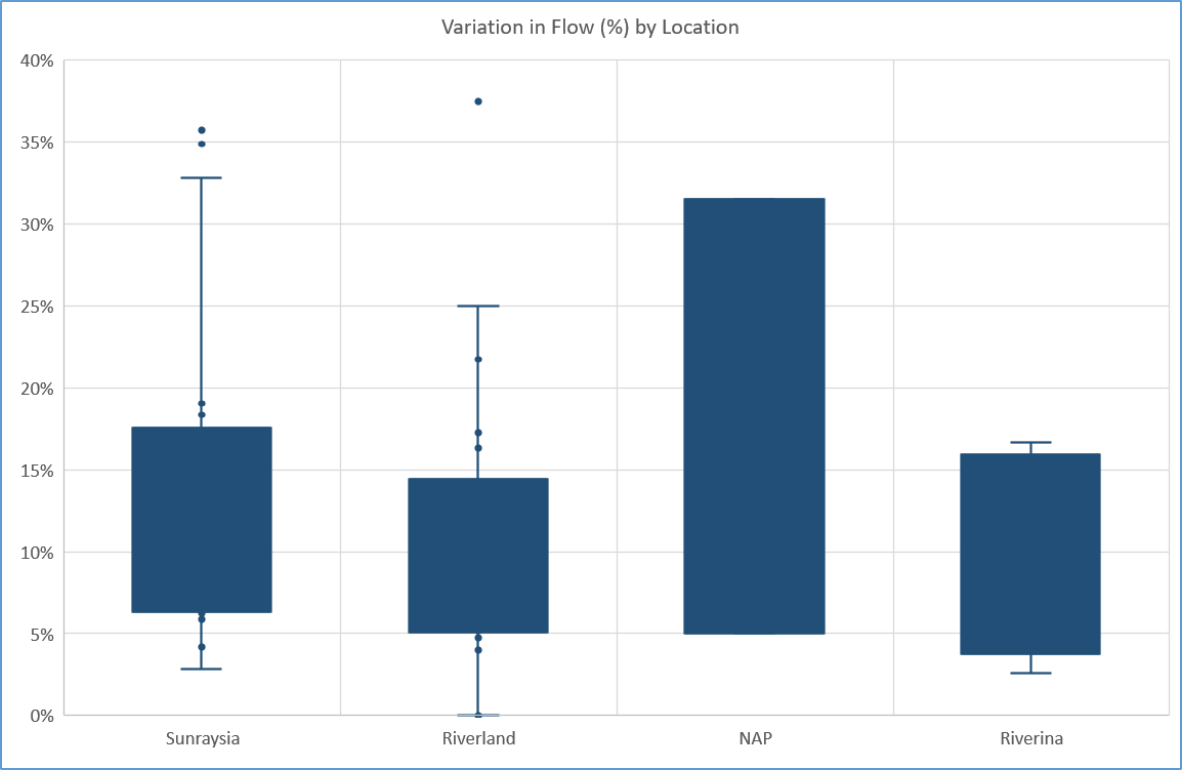 There is little difference in data between the regions. The bar for Northern Adelaide Plains (NAP) contains only two data points, one with very low variation and the other with quite high variation. Note that the sites with the highest variation (poorest performance) are distributed across Sunraysia, the Riverland and the NAP. It is likely that sites with high variation are present in the Riverina, but the small number of sites tested in that region limited the opportunity to identify them. 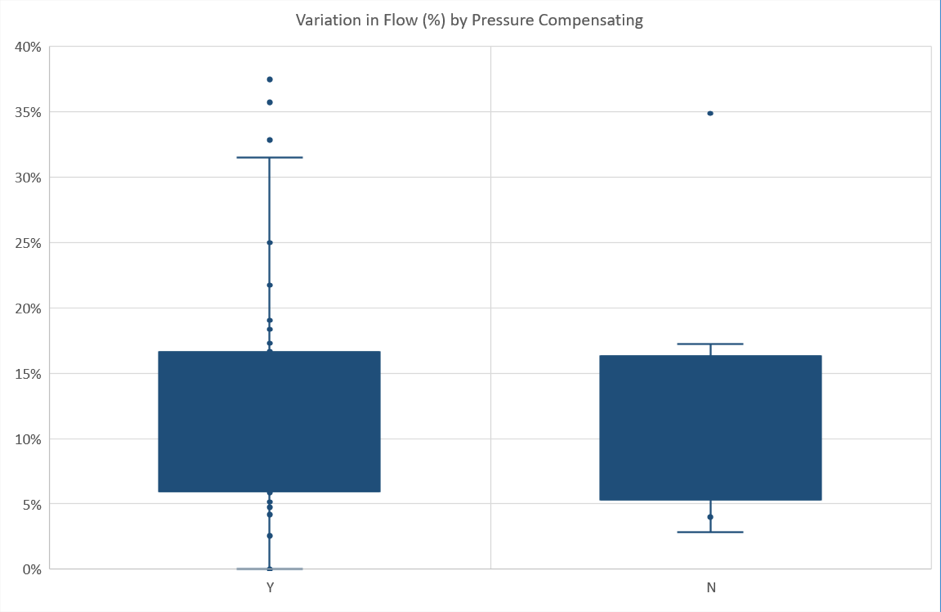 Figure 5 Relationship between variation in flow and pressure compensation

The graph indicates that there is little difference in performance between pressure compensating and non-compensating dripline in the middle range of the data (box), and in the worst performing sites. However, in both cases 75% of sites (the box representing the middle 50% plus the highest 25%) have variation in flow greater than the standard (<±5%). 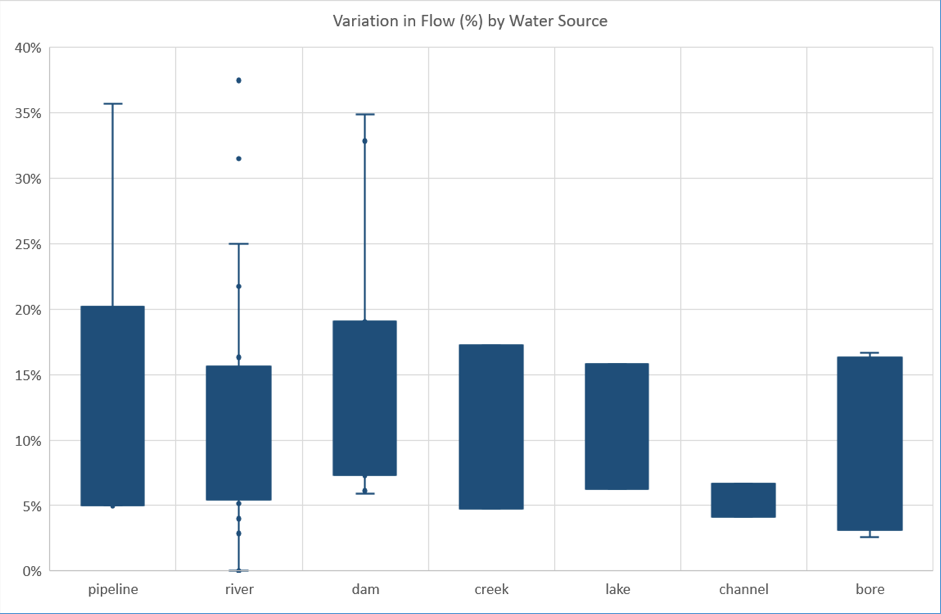 Figure 6 Relationship between variation in flow and water source

The performance of the systems varied a little depending on the water source (Figure 6), with a few clear trends. Water drawn from a channel showed the best performance, with a maximum variation in flow of 7%. However, this represents only three sites, so this is not clear evidence that channel water supply is superior to other water sources. At the other end of the scale, the worst performing sites drew water either direct from the river, or via a pipeline system or dam. Again, the number of sites represented by these high values is small, and therefore it is not clear that these water sources are inherently more problematic than others.

Data was collected from each property on the type of filtration used, both as the main filtration for the property, and as check filters at the valve unit. Filter type included both the form of filtration used (screen, disc or sand), and whether the filters flush automatically or must be manually flushed. 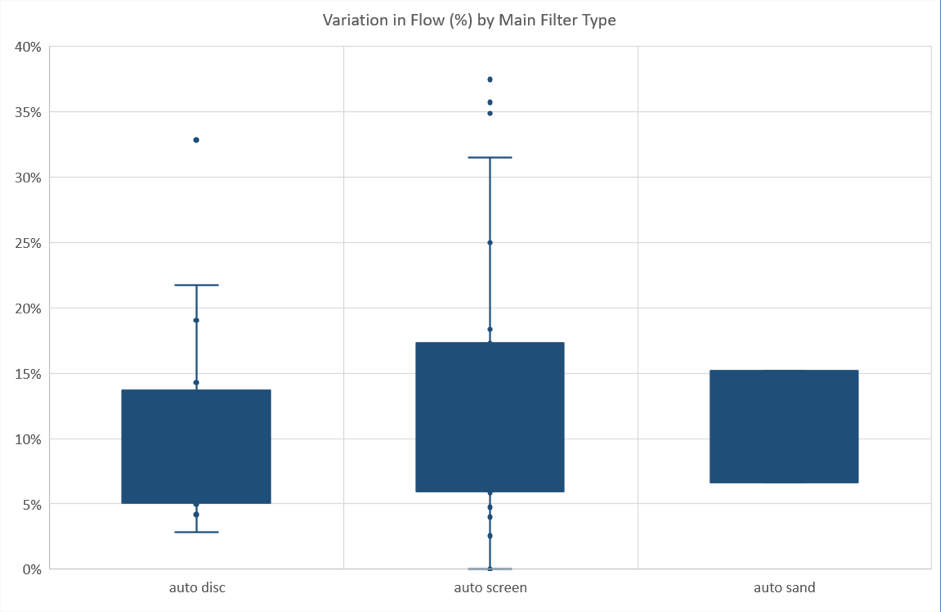 Figure 7 Relationship between variation in flow and main filter type

Data for the main filters at the property (Figure 7) shows that all properties utilise automatic flushing on their main filters. The performance of the different types of filters are similar, although sand filters did not show any sites with very high variation in flow, but this group only includes two sites, so is far from definitive. 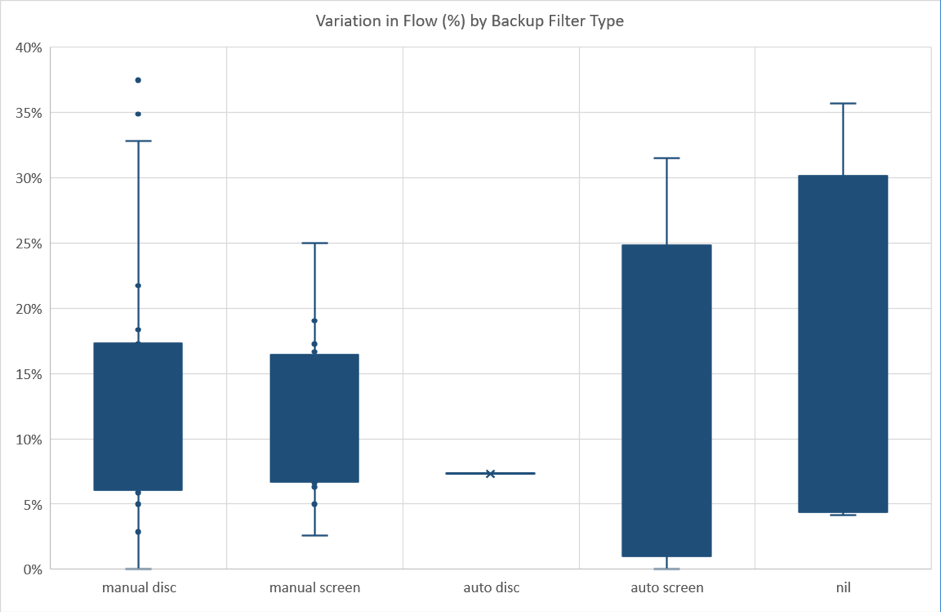 Figure 8 Relationship between variation in flow and backup filter type

The use of flushing manifolds is common across drip irrigated almonds in Australia. This involves linking a number of laterals together with a manifold at the downstream end, so that the whole group of laterals are flushed by opening a single tap on the manifold, rather than opening the ends of each lateral. This is much more efficient in terms of time commitment, but some growers have raised questions about the effectiveness of flushing manifolds in clearing debris from all laterals equally. 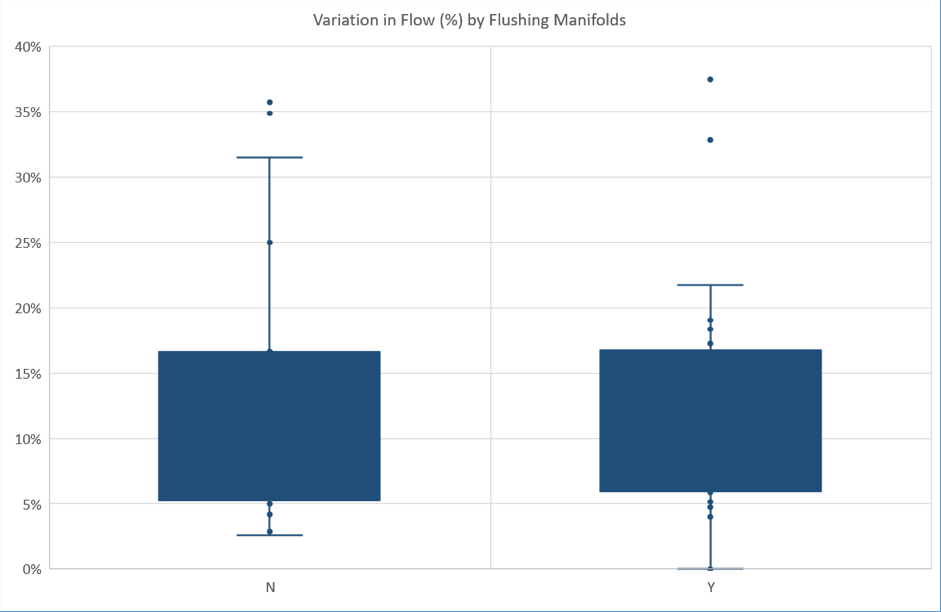 During the onsite evaluations, a lateral or flushing manifold was opened, and the colour of the flush water was assessed to determine the amount of debris in the system. This was carried out at most sites, although some sites were not assessed.

The purpose of this assessment was to determine how dirty the system was at the time of the evaluation. In some cases the grower flushed the system immediately before the evaluation, but at many sites this was not the case, and the condition of the system reflected normal conditions. 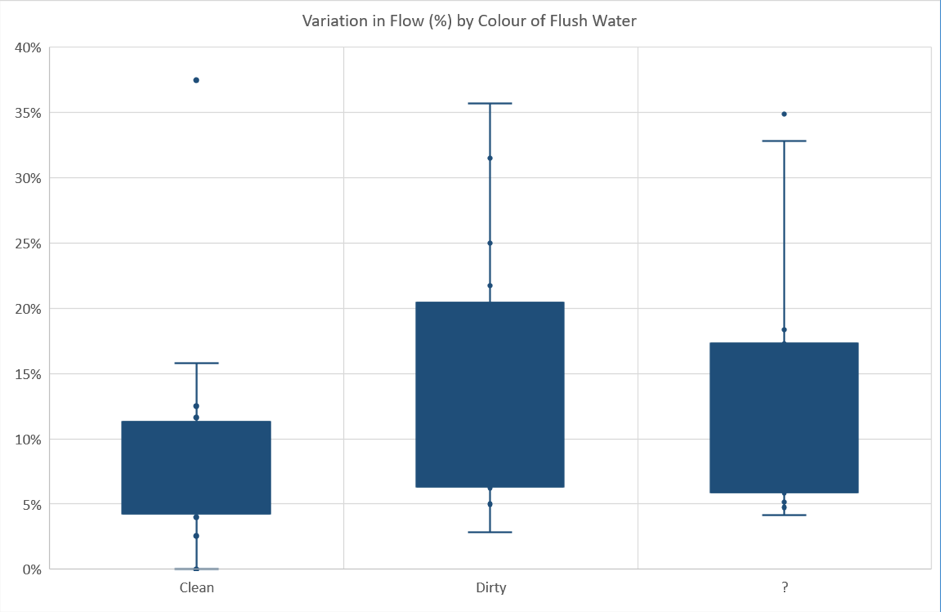 The data (Figure 10) suggests that there is a relationship between the colour of the flush water and performance of the system. Sites where the flush water at the time of the evaluation was clean (either completely clear or only slightly discoloured) showed generally lower values for variation in flow than sites where the water was categorised as dirty. There is one outlier in the “clean” data set with very high variation, which may reflect residual blockage from historical accumulate of debris in the system. Data displayed as “?” is those sites where the colour of flush water was not recorded.

The data collected and the comparisons made in the graphs indicate that the two most important management factors for good drip system performance are the age of the dripline, and the frequency of flushing.

In both cases there is a wide range in performance at a given dripline age (Figure 1) or flushing frequency (Figure 2), but there is also a clear trend towards better performance by systems with younger dripline, and by systems which are flushed more often. The relationship between variation in flow and the colour of flush water (Figure 10) further supports the importance of flushing.

The data does not support a blanket recommendation on the critical age at which systems should be replaced, or the ideal frequency for flushing systems. These will depend on the dripline product used, the makeup of the water being applied, and the maintenance carried out during the life of the system.

It is recommended, however, that regular system performance assessments should be carried out, and the results used to monitor for declining performance of valve units which may point to the need for replacement of the dripline.

It is also recommended that drip irrigation systems should be flushed frequently, as insurance against gradual build-up of debris in the system. In time this material will lead to blockages, requiring replacement of the dripline earlier than would perhaps have been necessary if the system were kept cleaner through more frequent flushing. There is evidence that many sites evaluated in this audit were not flushed frequently enough.